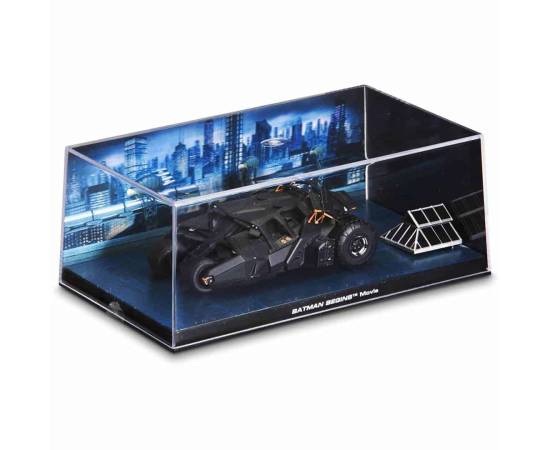 Along with a darker, more realistic version of Batman, the hit movie Batman Begins™ revitalised Gotham City and introduced an all-new, all different Batmobile – the Tumbler! Discover more exciting adventures with the Batman Automobilia Collection.

Batman Begins went back to the origin of the Dark Knight and followed Bruce Wayne through his training and into his first year as Batman. This superb Batmobile is presented in an action scene as seen in the film, The Tumbler, which is racing across the rooftops of Gotham City in an attempt to avoid being captured. This Batmobile includes a roof-access canopy, halogen spotlights and thermal-imaging D.V.E. to enhance the driver's vision.

This incredible 1:43 scale Batmobile comes complete with a 12-page magazine capturing the adventures of Batman in the comics of 2005 plus a feature on Nathan Crowley's ambitious task to build a moving armoured vehicle capable of high-speed chases.