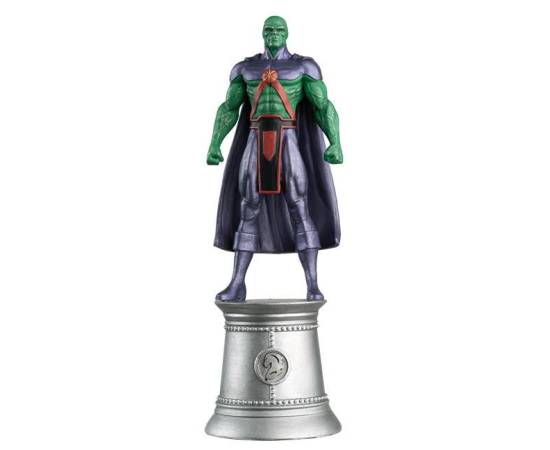 Magazine on demand, free of charge if we have it. Always shipped with original box.
The Martian Manhunter (J'onn J'onzz) debuted in the back-up story "The Strange Experiment of Dr. Erdel" in Detective Comics #225 (Nov. 1955), written by Joseph Samachson and illustrated by Joe Certa.[Note 1] The character is a green-skinned extraterrestrial humanoid from Mars, who is pulled to Earth by an experimental teleportation beam constructed by Dr. Saul Erdel. The Martian tells Erdel where he is from, and is told that to send him back will require the computer brain's thinking plot to be changed. The shock of the encounter kills Dr. Erdel and leaves J'onzz with no way of returning home. The character decides to fight crime while waiting for Martian technology to advance to a stage that will enable his rescue. To that end, he adopts the identity of John Jones, a detective in the fictional Middletown, USA.[2]

During this period, the character and his backstory differ in some minor and some significant ways from modern treatments. Firstly, as with his counterpart, the Silver Age Superman, J'onzz's power range is poorly defined, and his powers expand over time as the plot demands. The addition of precognitive abilities (Detective Comics #226) is quickly followed by telepathy and flight,[3][4] "atomic vision", super-hearing,[5] and many other powers. In addition, his customary weakness to fire is only manifested when he is in his native Martian form.

A more significant difference is that in this version of him, there is no suggestion that Mars is a dead planet or that the character is the last of his kind. Many of the tales of the time feature either Martian technology or the appearance of other Martian characters. Detective Comics #236 (October 1956), for example, features the character making contact with the planet Mars and his parents.