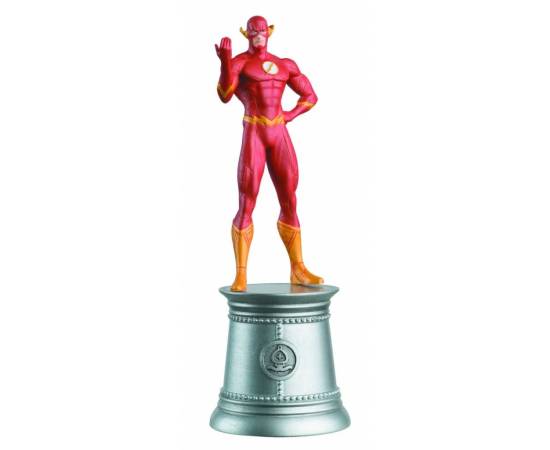 Magazine on demand, free of charge if we have it. Always shipped with original box.
The Flash (Bartholomew Henry "Barry" Allen) is a fictional superhero appearing in American comic books published by DC Comics. The character first appeared in Showcase #4 (October 1956), created by writer Robert Kanigher and penciler Carmine Infantino.[1] Barry Allen is a reinvention of a previous character called the Flash, who appeared in 1940s comic books as the character Jay Garrick.

Because he is a speedster, his power consists mainly of superhuman speed. Various other effects are also attributed to his ability to control the speed of molecular vibrations, including his ability to vibrate at speed to pass through objects. The Flash wears a distinct red and gold costume treated to resist friction and wind resistance, traditionally storing the costume compressed inside a ring.

Barry Allen's classic stories introduced the concept of the Multiverse to DC Comics, and this concept played a large part in DC's various continuity reboots over the years. The Flash has traditionally always had a significant role in DC's major company-wide reboot stories, and in the crossover Crisis on Infinite Earths #8 (Nov. 1985), Barry Allen died saving the Multiverse, removing the character from the regular DC lineup for 23 years. His return to regular comics is foreshadowed during the narrative (and a single image of a blur) in Grant Morrison's crossover story Final Crisis: Rogues' Revenge #3 (Nov. 2008), fully actualized in Geoff Johns' accompanying The Flash: Rebirth #1 (June 2009), kicking off a six-issue limited series. He has since played a pivotal role in the crossover stories Blackest Night (2009), Flashpoint (2011), Convergence (2015), and DC Rebirth (2016).