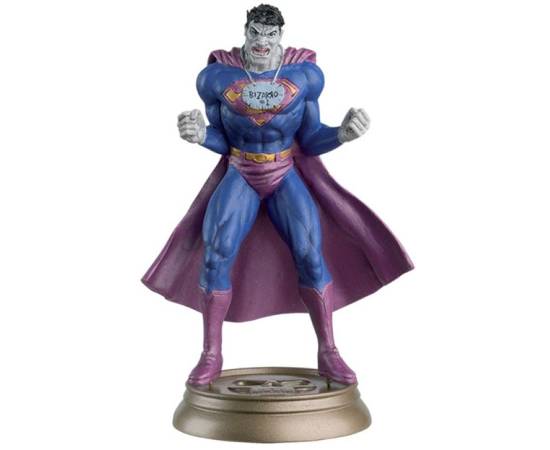 Magazine on demand, free of charge if we have it. Always shipped with original box.
Bizarro debuted in Superboy #68 (cover-dated October 1958, but on sale in August[1]), writer Otto Binder casting the character as a Frankenstein's monster pastiche that possessed all the powers of Superboy. Shunned for his unenviable appearance, the teen version of Bizarro only appeared in a single comic book story. An adult version appeared around the same time in the Superman daily newspaper comic strip written by Alvin Schwartz, debuting in Episode 105: "The Battle With Bizarro" (strips 6147–6242: August 25, 1958 to December 13, 1958). According to comics historian Mark Evanier, Schwartz long claimed that he originated the Bizarro concept prior to the character's appearance in Superboy.[2] The newspaper storyline introduced the strange speech patterns that became synonymous with the character, with all of Bizarro's comments meaning the opposite (e.g. "bad" means "good"). The newspaper version wore a "B" on his chest, as opposed to Superman's distinctive "S".[3]