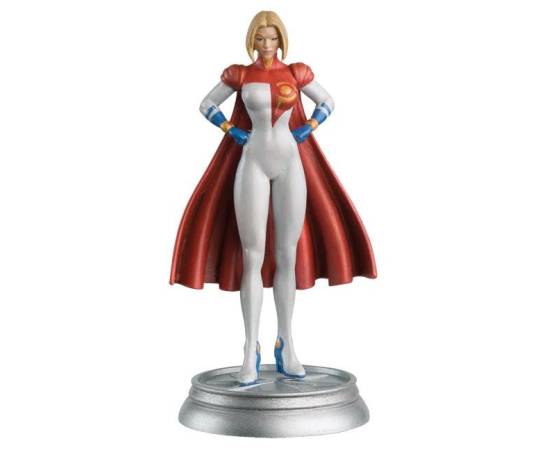 Magazine on demand, free of charge if we have it. Always shipped with original box.
Power Girl, also known as Kara Zor-L and Karen Starr, is a fictional DC Comics superheroine, making her first appearance in All Star Comics #58 (January/February 1976).[1] Power Girl is the cousin of DC's flagship hero Superman, but from an alternative universe in the fictional multiverse in which DC Comics stories are set. Originally hailing from the world of Earth-Two, first envisioned as the home of DC's wartime heroes as published in 1940s comic books, Power Girl becomes stranded in the main universe where DC stories are set, and becomes acquainted with that world's Superman and her own counterpart, Supergirl.

In common with Supergirl's origin story, she is the daughter of Superman's aunt and uncle and a native of the planet Krypton. The infant Power Girl's parents enabled her to escape the destruction of her home planet by placing her in a rocket ship. Although she left the planet at the same time that Superman did, her ship took much longer to reach Earth-Two. On Earth, as with other Kryptonians, Power Girl discovered she possessed abilities like super strength, flight, and heat vision, using which she became a protector of innocents and a hero for humanity. Though the specifics of how vary over subsequent retellings, Power Girl is later stranded on another Earth when a cosmic crisis affects her home of Earth-Two, and later carves out a separate identity for herself from her dimensional counterpart Supergirl once they are forced to coexist.