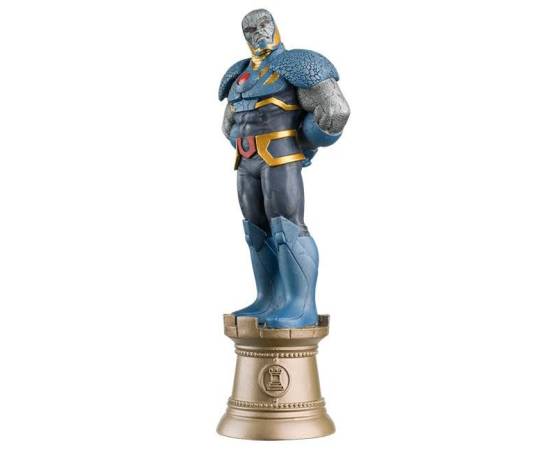 Magazine on demand, free of charge if we have it. Always shipped with original box.
Darkseid (/dɑːrksaɪd/) is a fictional supervillain appearing in American comic books published by DC Comics. Created by writer-artist Jack Kirby, the character made a cameo appearance in Superman's Pal Jimmy Olsen #134 (November 1970) before officially debuting in Forever People #1 (February 1971).[1] One of the most powerful beings in the DC Universe, along with Trigon, Nekron, Barbatos, Hades, Anti-Monitor, and Great Evil Beast, Darkseid serves as a staple Superman villain and is considered the archenemy of the Justice League and Teen Titans.

As the tyrannical ruler and former prince of the planet Apokolips and extremely and supremely powerful and dangerous higher extra and inter-dimensional Demon God of Evil, Darkseid's ultimate goal is to obtain the Anti-Life Equation to eliminate all free will in sentient beings and remake the universe in his own image. He is the father of Orion, Kalibak, Grayven, and Grail brother of Highfather husband of Suli Tigra Myrina and Grayven's mother and son of Yuga Khan and Heggra. Darkseid was ranked number 6 on IGN's top 100 comic book villains of all time[2] and number 23 on Wizard's 100 greatest villains of all time.