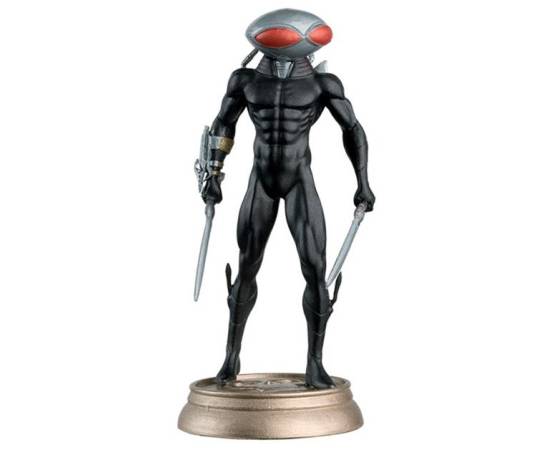 Magazine on demand, free of charge if we have it. Always shipped with original box.
Black Manta had no definitive origin story until #6 of the 1993 Aquaman series. In this origin, the African American child who would become Black Manta grew up in Baltimore, Maryland, and loved to play by the Chesapeake Bay. Throughout his youth he was kidnapped and forced to work on a ship for an unspecified amount of time, where he was physically abused by his captors. At one point, he saw Aquaman with his dolphin friends and tried to signal him for help but was not seen. Finally, he was forced to defend himself, killing one of his tormentors on the ship with a knife. Hating the emotionless sea and Aquaman, whom he saw as its representative, he was determined to become its master.[4]

An alternative version was given in #8 of the 2003 Aquaman series. In this origin, the boy who would become Black Manta was an autistic orphan placed in Gotham City's Arkham Asylum. He felt comfortable in freezing cold water, but found cotton sheets excruciatingly painful. Because the attendants at Arkham did not know how to deal with autism, they would end up restraining him to the bed as he struggled and screamed whenever they tried putting him to bed. In this version, young Black Manta was also fascinated when he saw Aquaman on television.

The boy would end up being subjected to experimental treatments. One treatment seemed to clear the boy's head, but left him violent as a result; he killed the scientist who had administered the treatment and escaped from Arkham.[2][5]