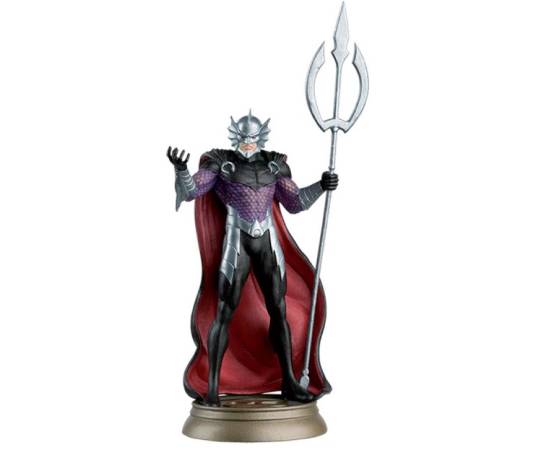 Magazine on demand, free of charge if we have it. Always shipped with original box.
Ocean Master Pre-Crisis was a high tech sea pirate who utilized many innovative gadgets and weaponry during his early years as a supervillain. He even utilized a special device that enabled him and his men to brave the depths of the sea without fear of the environment or drowning. Eventually he would better arm himself with a mastery of magical powers through Atlantean mystical relics giving him arcane abilities with effects including magical bolts and telepathy.[volume & issue needed]

Post-Crisis Orm was left a powerless individual with no remarkable abilities. However, after making a deal with the demon Neron, Ocean Master could manipulate magical energy once again but in greater amounts through use of the magic trident he was provided as a focus for his power. However, should he be separated from his trident, he would pay the price of a horribly blemished face and excruciating surges of pain. Orm also wore a helmet that let him breathe underwater and special body armor that let him withstand the pressures of the deep and offer some resistance from physical attacks.[volume & issue needed]

In the New 52 reboot, Orm is a full-blooded Atlantean with physiology similar to his half-brother; like Arthur he is capable of breathing under water without difficulty, and able to move and navigate the ocean deep with keen senses adapted to it. Likely due to his royal heritage, Orm is seemingly stronger than other Atlanteans, making him Super-Atlantean like Aquaman, having fought against him on equal footing more than once. His arsenal now consists of a trident (which he refers to as a scepter) and a helmet (which he refers to as the Crown) with oceanic manipulatory effects.[volume & issue needed]

The trident can control lightning (referred to as the storms) and his Crown which allows him to control massive amounts of water from the seas, to the level of tsunamis, water spouts, cyclones and other powerful tidal effects. The Crown was broken by Aquaman punching Orm yet mysteriously reformed itself as he made his escape during forever evil, indicating it may have self recovering properties