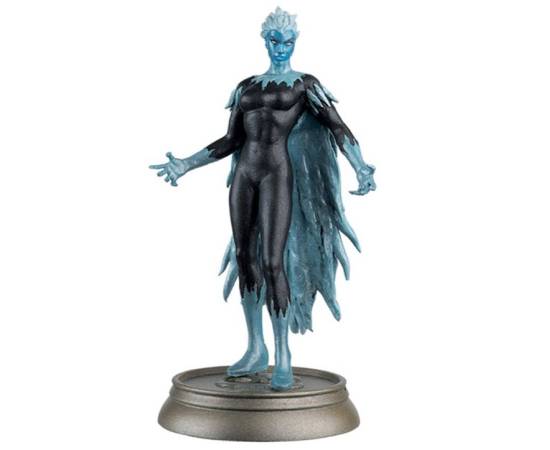 Magazine on demand, free of charge if we have it. Always shipped with original box.
In September 2011, The New 52 rebooted DC's continuity; Killer Frost is reintroduced in September 2013, as the "Villains Month" part of the Forever Evil – she was featured in the one-shot Justice League of America #7.2, also titled Killer Frost #1.[15] She can also be seen on the cover of Forever Evil #1, which hints at her involvement in that series where she's revealed to be Dr. Caitlin Snow, a scientist sent to S.T.A.R. Labs Outpost #72 in the Arctic to work on a thermodynamic engine whose creator had committed suicide. Snow soon discovered the place had been infiltrated by H.I.V.E. agents. When they tried to kill her inside the engine, Snow frantically ripped off the coolant system, merging her body with ice. Transformed into a heat vampire, she killed the H.I.V.E. agents out of revenge. She then wandered out into the cold until she came across a Norwegian camp and took their heat too. Hijacking a helicopter, she made it back to her hometown Pittsburgh. She even created a suit that helped her retain heat for longer. She later encountered the superhero Firestorm and discovered that his powers could temporarily heal her mutation. She tried recreating the Firestorm Nuclear Matrix several times, only to fail with each attempt. When Firestorm and the Justice League were declared dead by the Crime Syndicate, she lost hope for a cure to her condition.[16]

Killer Frost later has a scientist named Byte track down Martin Stein, the original creator of the Firestorm Matrix, to his secluded cabin while he had gone into hiding during the Crime Syndicate's takeover of Earth. She encountered Steve Trevor who was sent there on a mission to try to find the Justice League who were imprisoned inside Firestorm. Learning he was alive, Snow allied herself with the two men to find them. Soon they were attacked by supervillains Multiplex, Black Bison, Hyena, Tempest and Plastique for betraying the Syndicate. While fighting them off, Stein, Trevor and Frost teleported to another A.R.G.U.S. base, where they learned that to free the Justice League, they needed Wonder Woman's Lasso of Truth. Discovering Cheetah was keeping it as a trophy, they found her and her Menagerie, but were subdued. Doctor Light (Arthur Light) suddenly appeared and blasted everyone except Frost and Trevor unconscious. After defeating him, they managed to deliver the Lasso of Truth to Cyborg who successfully used it to free his teammates