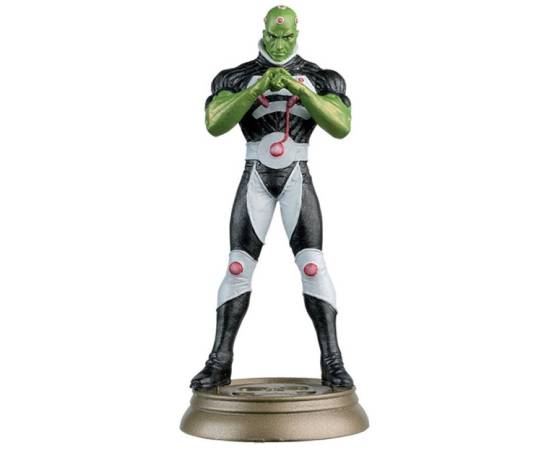 Magazine on demand, free of charge if we have it. Always shipped with original box.
Brainiac's origin in The New 52 is revealed in Superman #23.2. Vril Dox was acknowledged as the greatest scientist on his homeworld, Yod-Colu, given his advances in force field technology and miniaturization. He developed an artificial intelligence, C.O.M.P.U.T.O., allowing him to discover the fifth dimension. Dox discovered the fifth dimension was in a state of war, and a group of its inhabitants, the Multitude, had entered their dimension and destroyed over a hundred planets. Realizing Yod-Colu was next in the Multitude's path, Dox tried to find a way to save his planet, even performing experiments on his son. The magistrates of Yod-Colu sentenced Dox to exile, but Dox used C.O.M.P.U.T.O. to take control of Yod-Colu's computer networks. Copying the planet's database, Dox constructed an army of robot servants called Terminauts and miniaturized the city his wife and son lived on and bottled it in a force field, while the rest of Yod-Colu was destroyed by the Multitude.

After the destruction of Yod-Colu, Dox constructed an army of starships and distributed his consciousness across a series of robots that would each travel the universe in order to preserve planets from the Multitude, becoming known as the Collector of Worlds. One of these robots attacked Krypton. Dox became fascinated by Jor-El, a Kryptonian scientist who actually saved his homeworld from the Multitude. Upon returning to Krypton, however, Brainiac discovered Krypton had been destroyed