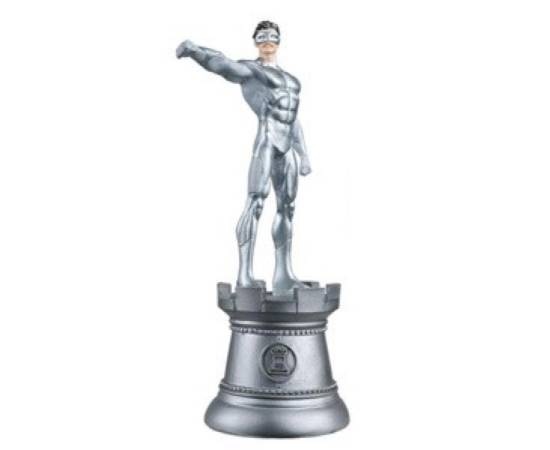 Magazine on demand, free of charge if we have it. Always shipped with original box.
Before he acquired a Green Lantern power ring, Kyle Rayner was a struggling-but-gifted freelance comic book artist who was raised in North Hollywood and lived and worked in Los Angeles. Kyle was raised by his mother as an only child; his father abandoned his mother when she was pregnant. It was later revealed that his father was a Mexican-American CIA agent named Gabriel Vasquez and that Aaron Rayner was merely an alias. Kyle and his mother lived a very modest lifestyle until he reached adulthood. After Hal Jordan, grief-stricken over the destruction of his home town of Coast City, went on a mad rampage killing various members of the Green Lantern Corps and the Guardians of the Universe, Rayner was found by the last surviving Guardian of the Universe, Ganthet. Ganthet gave Kyle the last working Green Lantern power ring that would allow him to conjure any form of matter or energy through sheer force of will.[2] Ganthet's reasons for choosing Kyle to bear the ring have never been made completely apparent, aside from Rayner having been in the right place at the right time: prior to bequeathing the ring upon Rayner, Ganthet simply utters, "You will have to do." Ganthet later revealed that humans make great Green Lanterns (before Hal Jordan's mental breakdown he was the Corps' greatest Green Lantern, and John Stewart became the first mortal Guardian of the Universe). Several sources, however, imply that Ganthet was following a deeper reason: Kyle Rayner was not chosen because he was fearless but because he was able to feel and overcome fear,[3][4] thus making him, and all the future Lanterns, less susceptible to Parallax's influence. The New Guardians retelling goes so far as to replace the scowling "You will have to do" with a smiling "It would seem I chose well."