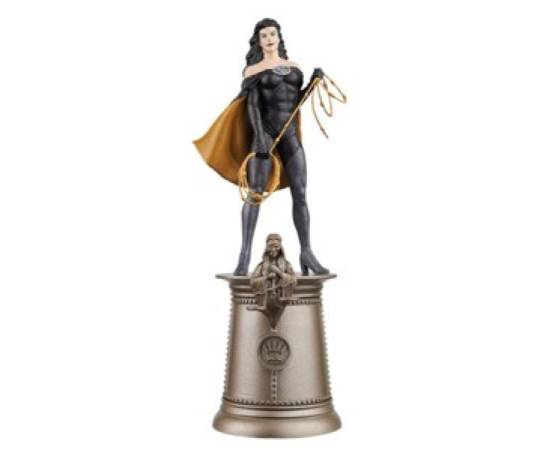 Magazine on demand, free of charge if we have it. Always shipped with original box.
In Post-Crisis continuity, as established in the 2000 graphic novel JLA: Earth 2 by Grant Morrison, Superwoman (and the rest of the Crime Syndicate) comes from a parallel world similar to Earth, but located in an antimatter universe (also home to the planet Qward).[13]

Superwoman continues to make occasional appearances as a member of the Crime Syndicate, most recently appearing in storylines in the Justice League and Superman comics. Unlike her pre-Crisis counterpart, her magic lasso doesn't change shape but releases the inhibitions of anyone tied to it (just as Wonder Woman's compels victims to tell the truth). Bizarrely she also possesses heat vision, as Superman and Ultraman do, although there is no explanation for this.

Taking the alias Lois Lane, Superwoman is an Amazon by birth, and has risen through the ranks to become the chief editor of the Daily Planet in what she calls "Patriarch's World". This disguise resembles Wonder Woman's secret identity of Diana Prince. At the Planet, Superwoman is shown to upset her colleagues; the antimatter-Cat Grant refers to Superwoman as "Queen Bitch",[16] and negatively alludes to her "friendship" with the antimatter Jimmy Olsen. In her later appearances, it is stated that prior to taking on Lois Lane's identity, Superwoman was born on Damnation Island, presumably the Antimatter counterpart to Themyscira (or "Paradise Island"). It is mentioned that she had murdered all of her fellow Amazons, and upon meeting Donna Troy, she becomes ecstatic over the prospect of being able to murder another one of her kind for the first time in years.[17] The Antimatter Universe's version of Superwoman is the first version of the character to combine Diana of Themyscira and Lois Lane.