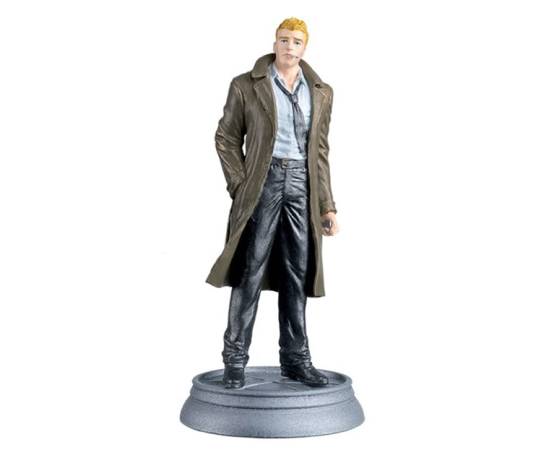 Magazine on demand, free of charge if we have it. Always shipped with original box.
Although a compassionate humanist who struggles to overcome the influence of both Heaven and Hell over humanity, and despite his occasional forays into heroism, Constantine is a foul-mouthed, disillusioned, British cynic who pursues a life of sorcery and danger. His motivation has been attributed to an adrenaline addiction that only the strange and mysterious can sate. He also seems to be something of a "Weirdness Magnet" (a term also used to describe Blue Devil).

John Constantine discusses his previous girlfriends and boyfriend.
Constantine is shown to be someone with a wide and international circle of contacts and allies, and is adept at making friends. At the same time, his close friends inevitably suffer or are outright killed simply by being in his life; this has left a severe mark on him. In #69, when the King of Vampires killed the man sleeping beside him and casually asked if he'd been a friend, John replied "Must be. He's dead."
Constantine is bisexual, which was first established in a 1992 comic which referred offhandedly to his having ex-girlfriends and ex-boyfriends. Early stories exclusively showed him dating women, although Brian Azzarello's Ashes & Dust in the City of Angels showed him as having relationships with men as well.[18][19][20] His romantic relationships in the New 52 have included numerous partners, most significantly Zatanna, as well as the sorcerer Nick Necro; all have been fraught with distrust and mutual disappointments. The relaunch Constantine the Hellblazer #1 (2015) reaffirmed Constantine's bisexuality through his interactions with male and female characters in the issue.[21] Later issues of Constantine the Hellblazer depicted John falling in love with a male bartender named Oliver, whom he dated.
Constantine also has a reputation as being one of the most powerful sorcerers in the world.[24] Despite this, Constantine rarely uses magic, instead choosing to use his wits to trick his opponents. Constantine is also referred to as "The Constant One"[24] because of his whole family tree being somewhat connected to the occult. Many of his ancestors are sorcerers from different eras of history, and have taken part in many known historical events. Some of his ancestors have roles in other works outside Hellblazer, such as Batman: The Order of Beasts, The Sandman and Books of Magic.[25]
While Constantine has worn many clothes over the years, he was originally portrayed as often wearing a blue pin-stripe suit, tan trench coat, and occasionally gloves. As the series progressed, his trademark attire became a grungier (or perhaps the same, just older) trench coat, white shirt, and black tie, but eventuallyTemplate:Issue 232 returned more to his earlier fashion. Constantine smokes Silk Cut cigarettes, consuming thirty or so a day.[26] Constantine also occasionally breaks the fourth wall, where he talks to the reader and narrates the story himself