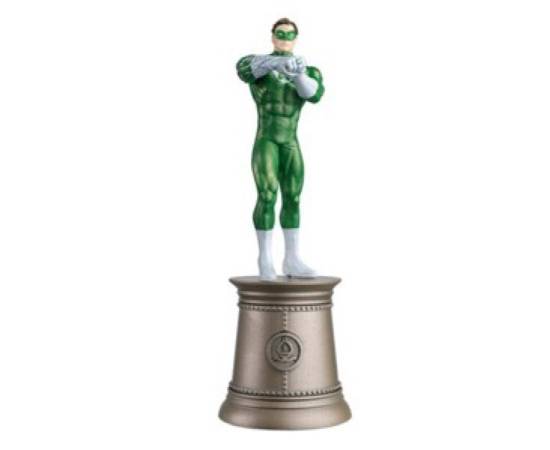 Magazine on demand, free if we have it. Always delivered with original box.
Power Ring is one of the members of the Crime Syndicate who arrived from Earth-3 at the end of the "Trinity War" event. [13] Power Ring is the wicked counterpart of Hal Jordan's Green Lantern, and in an inverse relationship to the Green Lantern, the character and union member "Power Ring" is actually Volthoom's ring while Harold Jordan (counterpart of Hal Jordan's Earth-3) is simply his current ship, though both are referred to as Power Ring throughout the comics. Harold worked as a janitor at Ferris Air, where he spied on Carol Ferris' operations in order to sell them. When confronted by Carl Ferris, Abin Sur's Volthoom Ring chooses Hiccup, leading him to Abin's crashed ship. Abin begs Hiccup to take the ring, which he does, freeing Abin Sur. Hiccup quickly realizes his mistake, as the ring opens a pocket dimensional portal to charge, freeing a creature that attacks Hiccup. [14] Power Ring then continues to form the Crime Syndicate with Ultraman, Superwoman, Owlman and Johnny Quick [15]

He is first seen at the end of the Trinity War emerging with the rest of the Crime Syndicate from the Earth-Three portal. He immediately attacks the Justice League upon arrival, knocking them all down with a blast of energy as Harold nervously wonders if the area is safe. [16] During the "Forever Evil" scenario, Power Ring accompanies Deathstorm in his raid on Belle Reve and destroys the roof to free his inmates. [17] Later, again accompanying Deathstorm, Power Ring attacks the Rogues, who have refused to cause mass deaths in their own town, against orders from the Crime Syndicate. [18] When Deathstorm leaves to return to the Syndicate lab, Power Ring, along with members of the Secret Society, attacks Batman, Catwoman, and Lex Luthor's Injustice Society at Wayne Enterprises. Batman attempts to stop Power Ring with a Sinestro Corps Ring, but the Power Ring Constructs are able to remove the ring and destroy it. However, Batman's use of the ring summons Sinestro. [19] Power Ring fights Sinestro, but Sinestro cuts off his arm with the ring; after the ring finds Hiccup irreparably damaged, it flies away. Hiccup thanks Sinestro for freeing him from his curse. Sinestro salutes his thanks and cremates him. The ownerless ring then flies off to find a new host. [20]

Although it appears that Hiccup possesses the Ring of Volthoom with a lot of skill, the Ring of Volthoom is actually the one in control, although Harold has some independent control over the power of the Ring. [12] The volthoom ring is as powerful as a Green Lantern ring [21] and is even able to fight on par with a Sinestro Corp ring, remove it from the user's hand, and destroy impressively the ring of Sinestro Corps itself. The Outsider refers to Power Ring as its master and mentions to Pandora that Power Ring killed many immortal beings during the time of the Crime Syndicate on Earth-Three.