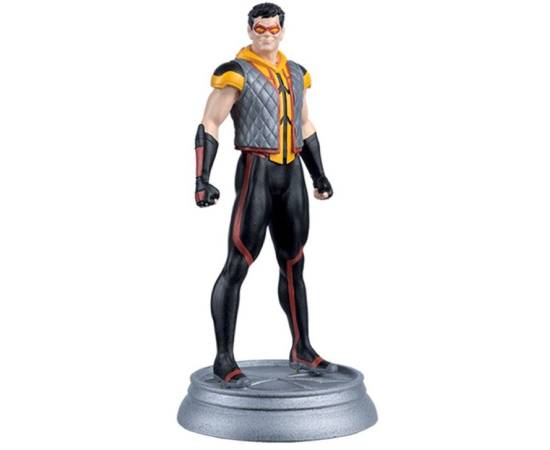 Magazine on demand, free of charge if we have it. Always shipped with original box.
Cisco Ramon began his career as Vibe shortly after Aquaman disbanded the original Justice League. When young Cisco heard that a new Justice League was forming in his own hometown Detroit, he decided to give up his position as the leader of a local street gang, Los Lobos, to join.[1] What made Cisco a candidate was his metahuman ability to emit powerful vibratory shock waves.

Vibe's presence on the team caused Aquaman and the Martian Manhunter to harbor some strong doubts about the new JLA, particularly after he got the League involved in a rumble with a rival gang.[3] Vibe soon proved his mettle during the League's battles against Cadre,[4] Anton Allegro[5] and Amazo.[6] He stayed with the League through the Crisis on Infinite Earths crossover, when his powers played a vital role in defeating Despero.[7]

During Darkseid's assault on Earth during the Legends mini-series, the Justice League of America was disbanded and Cisco left his JLA comrades to seek the familiar solace of the streets. Vibe was attacked by one of Professor Ivo's androids, and became the first Justice League member to be killed in the line of duty.[8] The Martian Manhunter brought Vibe's body back to the League's mountain sanctuary, where Vibe was laid to rest in a cryogenic chamber. Cisco's dead form has twice been resurrected by evil-doers.[9][10]

One of Vibe's brothers, Armando Ramon, developed a similar set of vibratory powers.

In the Trinity maxi-series, reality is altered, and a living Cisco is shown as a member of The League, an underground version of the Justice League.[11] Soon after Superman, Batman and Wonder Woman return, his head is disintegrated by an energy blast, killing him again.

In a Justice League of America tie-in to the "Blackest Night" storyline, Vibe was reanimated as a member of the Black Lantern Corps, rising from his coffin in the Hall of Justice.[12] Alongside the Black Lantern Steel, Vibe attacked his former teammates, Gypsy and Vixen, until Doctor Light destroyed him.[13]