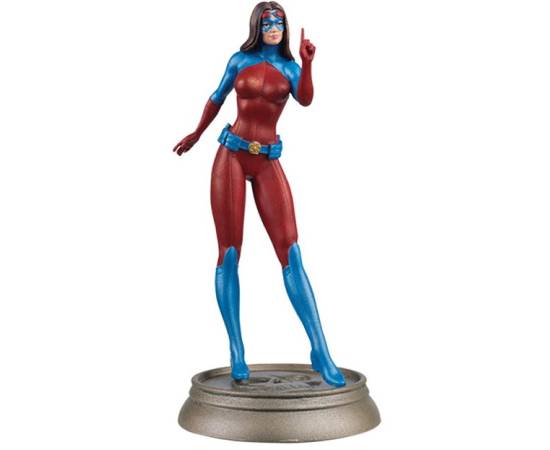 Magazine on demand, free of charge if we have it. Always shipped with original box.
In September 2011, The New 52 rebooted DC's continuity. In this new timeline, a new, female Atom is introduced, Rhonda Pineda, a Hispanic American college student from Ivy Town.[7] She is revealed to be working as a reluctant spy for Amanda Waller and Steve Trevor, gathering intel on the new Justice League recruits. She is noted to be "the most important member of the Justice League of America" by Steve Trevor.[8] At the conclusion of the "Trinity War" storyline, she is revealed to in fact be betraying both teams; she hails from the alternate universe of Earth-3, where she is a member of the Crime Syndicate, operating under the name Atomica. She also reveals that by placing a sliver of Green Kryptonite in Superman's optic nerve, she caused him to accidentally kill Doctor Light, with the added effect of severely weakening and almost killing Superman over time.[9]

Atomica originally worked on Earth-3 with Johnny Quick as a thief and killer. One night after killing two cops, they are cornered on the roof of S.T.A.R. Labs during a storm. Lightning hits a satellite, electrocuting Johnny and granting him speed powers. Rhonda falls inside the building and lands near Ray Palmer's Atomico work, gaining size and density changing powers.[10] During the final battle with the Crime Syndicate, Atomica reduces her size and is killed when Lex Luthor steps on her.[11]