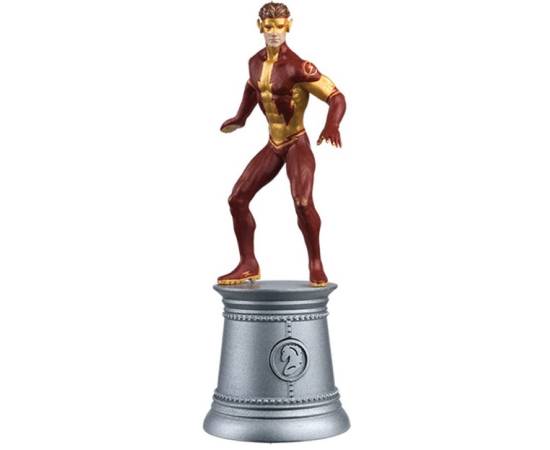 Magazine on demand, free of charge if we have it. Always shipped with original box.
Kid Flash is the name of several fictional characters appearing in comic books published by DC Comics, originally created by John Broome and Carmine Infantino, as a junior counterpart to DC Comics superhero The Flash. The first version of the character, Wally West, debuted in The Flash (vol. 1) #110 (1959). The character, along with others like the first Wonder Girl, Aqualad, and Speedy, was created in response to the success of Batman's young sidekick Robin. These young heroes would later be spun off into their own superhero team, the Teen Titans. As Kid Flash, Wally West made regular appearances in Flash related comic books and other DC Comics publications from 1959 through the mid-1980s until the character was reinvented as the new version of The Flash.

Later, well after Wally West had made a name for himself as the new Flash, the character of Bart Allen, grandson of the second Flash Barry Allen, was brought into the past from his home in the future and served as the young hero Impulse. In 2003, with writer Geoff Johns' relaunch of a new Young justice volume, Bart donned the mantle of Kid Flash after being nearly killed by the assassin Deathstroke. As Kid Flash, Bart appeared in Teen Titans and The Flash (vol. 2) regularly until the Infinite Crisis event, where a disappearance of Wally West made Bart the fourth Flash. Apparently killed by the Rogues, Bart was resurrected in the 31st century by Legion of Super-Heroes member Brainiac 5 and retook the mantle of Kid Flash. Following a 2011 reboot, DC introduced a new interpretation of Wally West as its latest Kid Flash in 2014, who was later established as being the original Wally's younger cousin Wallace West.

An amalgamation of Wally and Wallace West appears as the first live adaptation of Kid Flash in the Arrowverse, played by Keiynan Lonsdale.