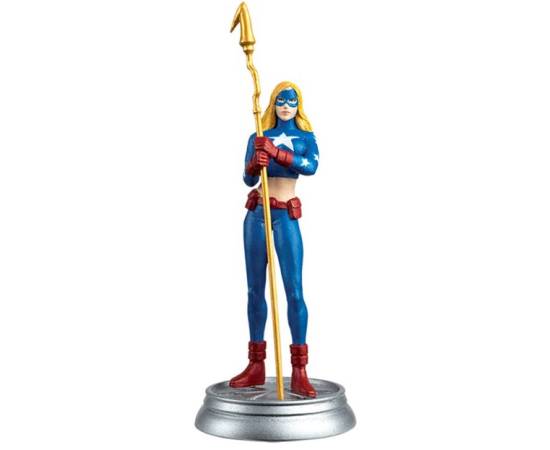 Magazine on demand, free of charge if we have it. Always shipped with original box.
Courtney Whitmore, stepdaughter of Pat Dugan, finds the original Star-Spangled Kid's gear in her stepfather's belongings. She dons the costume to annoy Dugan, as she resents his marrying her mother and moving the family from Los Angeles to Blue Valley, Nebraska. Dugan, a skilled mechanic, designs and builds S.T.R.I.P.E., a robotic suit that he uses to accompany and protect her.

During her time in Blue Valley, her frequent nemesis is the young villainess known as Shiv, daughter of the immortal Dragon King. Their most recent rematch was in Infinite Crisis, on a page added to the hardcover edition.

Stargirl[edit]
Courtney joins the Justice Society of America. After being given Starman Jack Knight's cosmic staff, she changes her identity to Stargirl. Courtney appears in most issues of JSA and it is in these pages that her half sister Patricia Dugan is born.

Starman and Stargirl on the cover of JSA: All Stars #4 (Oct. 2003); art by John Cassaday.
Later, she confronts her predecessor's killer, Solomon Grundy. Driven further into madness by the Joker's chemical assault, Grundy attacks the JSA headquarters with the head of the Statue of Liberty. With the aid of Jakeem Thunder, Courtney fights Grundy in the streets and into the sewers below. The young heroes barely defeat Grundy. Jakeem's Thunderbolt repairs the Statue. Grundy later develops an obsession with Courtney.

Courtney encounters Merry Pemberton, the sister of the original Star-Spangled Kid, during the "Sins of Youth" storyline. Merry's concerns about her brother's legacy and about young superheroes battling adults causes friction with Courtney. They resolve their differences during a battle against the forces of Klarion the Witch Boy. Courtney later saves Merry's life during an attack by Amazo. During this incident, Courtney is magically aged to an adult by Klarion.

Later, she discovers her biological father (Sam Kurtis) working as a common thug for an incarnation of the Royal Flush Gang. They later confront each other during one of the Flush Gang's robberies.[2]

In Stars and S.T.R.I.P.E. and an issue of Impulse, Courtney hints at having a crush on Robin (Tim Drake), a concept that was not developed in subsequent issues.

Courtney briefly dates fellow JSA member Captain Marvel, who, in his secret identity of Billy Batson, is the same age as she.[3] To outsiders, however, Captain Marvel is by all appearances an adult, and the relationship between Marvel and Stargirl draws criticism from Jakeem Thunder and Jay Garrick. After Garrick confronts them, Marvel leaves the JSA and Courtney, instead of revealing his secret to the team. Marvel later returns to the JSA and explains that the Wisdom of Solomon prevents him from revealing his secret identity.

A glimpse into the future shows an adult "Starwoman" married to Albert Rothstein, the JSA member known as Atom Smasher.