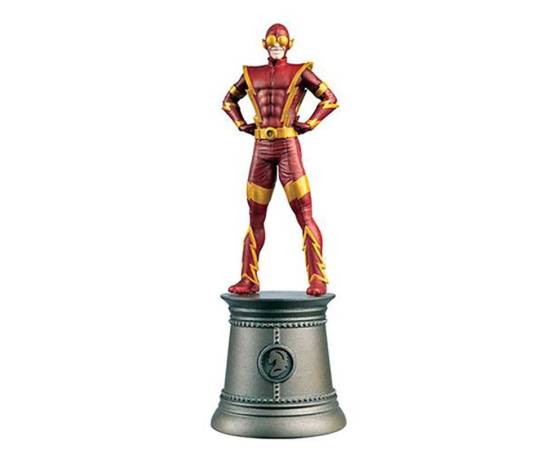 Magazine on demand, free of charge if we have it. Always shipped with original box.
In September 2011, The New 52 rebooted DC's continuity. In this new timeline, Johnny Quick is one of the members of the Crime Syndicate to arrive from Earth 3 at the conclusion of the "Trinity War" event.[5] Johnny Quick, known as Jonathan Allen on Earth 3, works with Rhonda Pineda as professional thieves and killers. One night after killing two cops, "Johnny and Rhonnie", as they are known, end up cornered on the roof of S.T.A.R. Labs during a storm. Lightning hits a satellite, electrocuting Johnny, causing him to gain his powers, while Rhonda also gains hers by falling into the lab near Ray Palmer's Atomico work.[6]

During the Forever Evil storyline, Johnny Quick invades Iron Heights Penitentiary and frees its inmates at the time when the Rogues were in the middle of freeing Trickster.[7] When Lex Luthor's team infiltrates the fallen Watchtower, Johnny Quick joins in the fight against them where Captain Cold uses his cold-gun to freeze Johnny Quick's leg and break it off. When Alexander Luthor of Earth-3 is freed and becomes Mazahs, he kills Johnny Quick and steals his powers.[8]