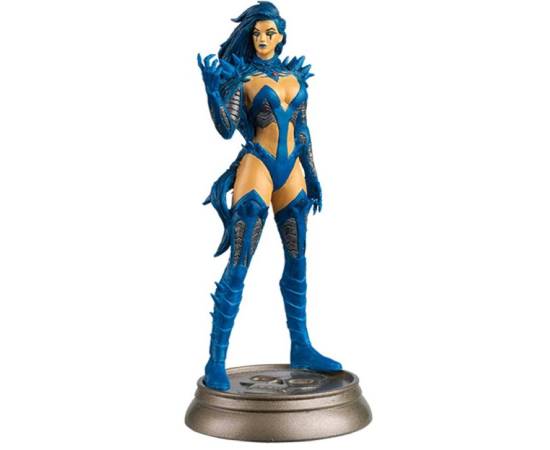 Komand'r is the firstborn child and eldest daughter of Tamaran's royal family. The first princess born in over a century, she should have been courted and showered with honors. On the day she was born, the Citadel Empire attacked and destroyed the western Tamaranean city of Kysarr and killed three thousand citizens in her name. Though she was in no way at fault for what had happened, Komand'r was, for all time, inextricably linked with that terrible day. To make matters worse, Komand'r was crippled by a childhood illness that left her unable to harness ultraviolet light into energy to fly like most Tamaraneans. Because of Komand'r's naturally grim disposition, a stark contrast to the royal family's generally contented outlook, the subjects of Tamaran hated her. As a result, though first in the line of succession, she was denied her birthright to be the next Crown Princess of Tamaran to maintain the respect and prestige of the royal family. Her privileges, honors, and her royal style and dignity were transferred to her younger sister, Princess Koriand'r (who would later become known as Starfire). Inwardly, Komand'r's rage grew and her resentment turned to hatred for her own world, her people, her family, and lastly her younger sister who, in Komand'r's eyes, made the fateful mistake of being born. Komand'r's hatred continued and intensified when she and her sister were sent, per Tamaran's warlike custom, for warrior training with the Warlords of Okaara. Komand'r's true feelings were exposed when during a sparring exercise she attempted to kill her younger sister. As a result, she was expelled by the Warlords. Humiliated by her own transgression, Komand'r swore vengeance and joined the Citadel, quickly rising through their ranks to become a warrior-maiden fighting against the forces of her own world and, ultimately, her own family.