Doctor Who Eaglemoss 001 The eleventh doctor 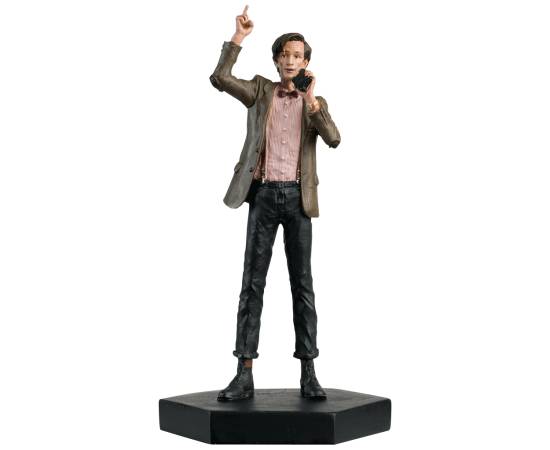 The definitive collection of Doctor Who figurines begins with a bold challenge. At Stonehenge, in the firing line of a fleet of his greatest enemies, the Eleventh Doctor (Matt Smith) reminds his foes just who they are dealing with in the episode 'The Pandorica Opens'.

The Eleventh Doctor figurine depicts actor Matt Smith precisely as he appears in The Pandorica Opens, which means he is wearing the Donegal tweed and the red shirt and braces. In his left hand, he clutches a communicator, one of a pair that he and River Song use to keep in touch. The Doctor’s feet are set firmly apart as he stands atop one of the fallen pillars of Stonehenge, with the air of a rock star bossing the stage. His right index finger points aloft as he addresses the enemies circling above him

The accompanying magazine looks at this season finale and the Eleventh Doctor in detail and provides a complete guide to the Doctor's TARDIS. Plus, there's a review of Doctor Who's astonishing debut year.