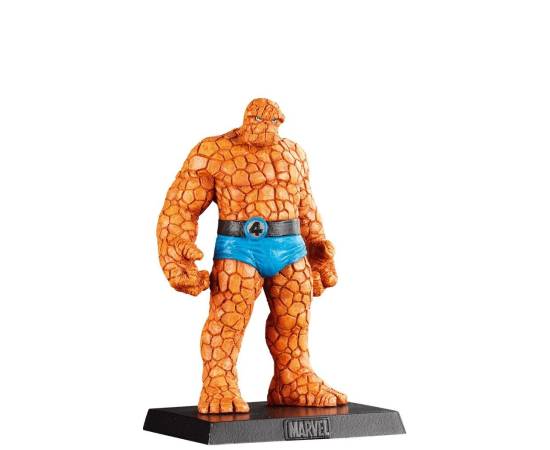 Orphan Benjamin J. Grimm grew up on the sordid sidewalks of New York’s Yancy Street and grew up to be a gruff but kindhearted young man whose only escape lay in a college football scholarship. While attending Empire State he earned the eternal friendship of genius Reed Richards and promised to pilot the starship Richards intended to design and build. Grimm took on military service after college to fulfill his dream of becoming a flyboy and gained experience in the astronaut program that would serve him well in his future.

Reconnecting with Reed Richards, Grimm agreed to take his friend and siblings Sue and Johnny Storm on an illicit test flight of Richards’ new spacecraft, but warned him of his misgivings over its shielding. While in space, the four found themselves bombarded by cosmic rays and Grimm managed to bring the ship in for a crash-landing back on Earth. Upon emerging from the wreckage, the crew was subject to incredible changes from the radiation, and the pilot himself lucklessly transformed into a hulking, boulder-skinned monstrosity quickly dubbed the Thing. From then on, Grimm and his fellow travelers would operate as team—and a family—known as the Fantastic Four.