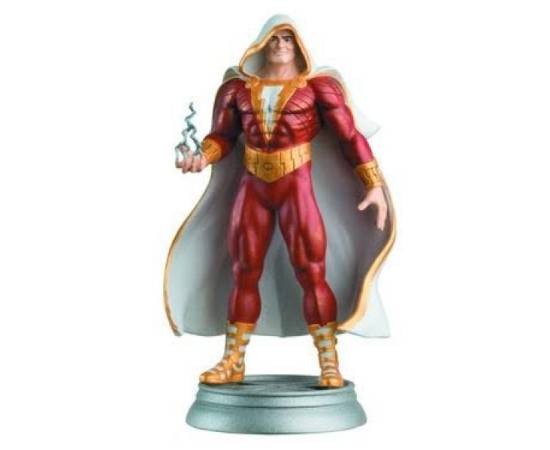 Magazine on demand, free of charge if we have it. Always shipped with original box.
Captain Marvel, also known as Shazam (/ʃəˈzæm/), is a fictional superhero appearing in American comics originally published by Fawcett Comics, and currently published by DC Comics. Artist C. C. Beck and writer Bill Parker created the character in 1939. Captain Marvel first appeared in Whiz Comics #2 (cover-dated Feb. 1940), published by Fawcett Comics. He is the alter ego of Billy Batson, a boy who, by speaking the magic word "SHAZAM!" (acronym of six "immortal elders": Solomon, Hercules, Atlas, Zeus, Achilles, and Mercury), can transform himself into a costumed adult with the powers of superhuman strength, speed, flight and other abilities. The character battles an extensive rogues' gallery, primarily archenemies Doctor Sivana, Black Adam, and Mister Mind.

Based on book selling points, the character was the most popular superhero of the 1940s, outselling even Superman.[2][3] Fawcett expanded the franchise to include other "Marvels", primarily Marvel Family associates Mary Marvel and Captain Marvel Jr., who can harness Billy's powers as well. Captain Marvel was also the first comic book superhero to be adapted into film, in a 1941 Republic Pictures serial, Adventures of Captain Marvel, with Tom Tyler as Captain Marvel and Frank Coghlan, Jr. as Billy Batson.

Fawcett ceased publishing Captain Marvel–related comics in 1953, partly because of a copyright infringement suit from DC Comics alleging that Captain Marvel was a copy of Superman.[4] In 1972, Fawcett licensed the character rights to DC, which by 1991 acquired all rights to the entire family of characters. DC has since integrated Captain Marvel and the Marvel Family into their DC Universe and has attempted to revive the property several times, with mixed success. Due to trademark conflicts over other characters named "Captain Marvel" owned by Marvel Comics,[5] DC has branded and marketed the character using the trademark Shazam! since his 1972 reintroduction.[6] This led many to assume that "Shazam!" was the character's name. DC renamed the mainline version of the character as "Shazam!" when relaunching its comic book properties in 2011,[7] and his associates became the "Shazam Family".[8]