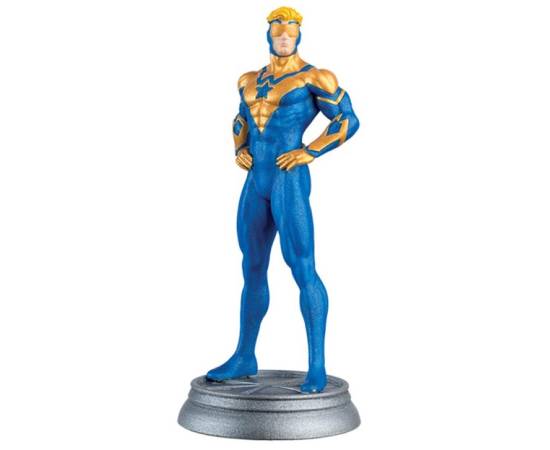 Magazine on demand, free of charge if we have it. Always shipped with original box.
Booster Gold (Michael Jon Carter) is a fictional superhero appearing in American comic books published by DC Comics. Created by Dan Jurgens, the character first appeared in Booster Gold #1 (February 1986) and has been a member of the Justice League.

He is initially depicted as a glory-seeking showboat from the future, using knowledge of historical events and futuristic technology to stage high-publicity heroics. Booster develops over the course of his publication history and through personal tragedies to become a true hero weighed down by the reputation he created for himself.

Booster Gold first appeared in Booster Gold #1 (February 1986),[3] being the first significant new character introduced into DC Universe continuity after the Crisis on Infinite Earths. The next year, he began to appear regularly in the Justice League series remaining a team member until the group disbanded in 1996. He and his former Leaguers subsequently appeared as the "Superbuddies" in the Formerly Known as the Justice League miniseries and its JLA: Classified sequel "I Can't Believe It's Not the Justice League".

On March 16, 2007, at Wizard World Los Angeles, Dan DiDio announced a new ongoing series titled All-New Booster Gold, which was later published as simply Booster Gold. The series follows the events of 52 and was initially co-written by Geoff Johns and Jeff Katz, with art by creator Jurgens and Norm Rapmund.[4][5] The series focuses primarily on Booster Gold's clandestine time travel within the DC Universe.[6] The series also features Rip Hunter, Skeets, and Booster's ancestors Daniel Carter and Rose Levin as supporting characters. The tagline of the series is: "The greatest hero you've never heard of!"[7] Katz and Johns left the book after 12 issues (#1-10, #0, and a One Million issue). Jurgens and Rapmund stayed. Jurgens assumed writing duties following four issues by guests Chuck Dixon and Rick Remender.