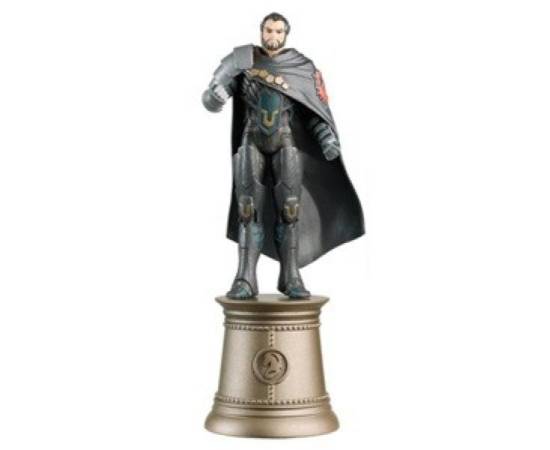 Magazine on demand, free of charge if we have it. Always shipped with original box.
In 2011, DC chose to revamp its continuity, rebooting many characters while retaining the histories for some others, as part of its The New 52 publishing event. Following this, Zod is hinted at several times. A character resembling Zod made a cameo in Action Comics #5 (March 2012), as a prisoner in the Phantom Zone; in Action Comics #13 (December 2012) a ghost in the Phantom Zone says "Kneel before..." multiple times while attacking Superman, a reference to Zod's iconic saying. Zod makes his first full appearance in Action Comics #23.2: General Zod (September 2013), written by Greg Pak, with art by Ken Lashley.[16]

A new origin for Zod was introduced. Zod was born to scientist parents. When he was a young boy, Zod and his parents traveled to Krypton's wilderness in order to discover new creatures. Their ship was attacked by creatures, leaving the family stranded in the jungle. While his parents were killed by the animals, Zod managed to survive for one year until Jor-El and his older brother Zor-El saved him. After reaching adulthood, Zod became one of Krypton's best soldiers, attaining the rank of general. Zod developed a hatred towards an alien species called the Char and secretly ordered the creation of a Char-looking creature, unleashing it on Krypton's population, so he could justify a war against the Char. Jor-El discovered the deception and turned Zod over to the authorities. The council found Zod guilty of treason and banished him and his closest followers, Faora and Non, to the Phantom Zone.[17]

Many years later, a mysterious event caused the Phantom Zone to weaken, allowing some of its prisoners to escape into normal space. Zod traveled to Earth, landing in the Sahara Desert. There, Zod's Kryptonian powers began to manifest for the first time, brutally slaughtering a group of travelers. Zod was soon attacked by the Justice League of America until Superman and Wonder Woman arrived, the latter restraining him with her magic lasso. Zod recognized Superman as Kal-El, the son of Jor-El. Superman decided to keep Zod in the Fortress of Solitude's alien zoo. While there, he reveals to Superman that Faora also traveled to Earth with him, and vows to track her down.