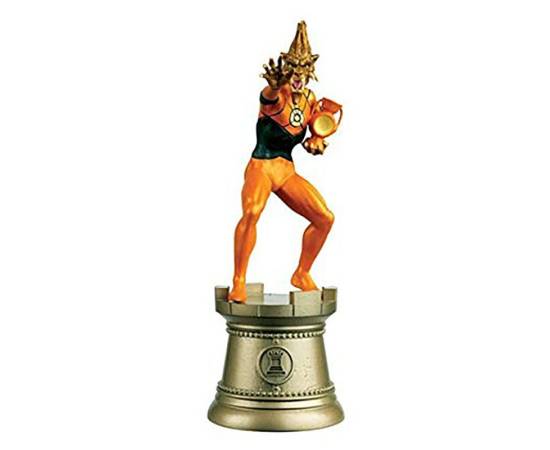 Magazine on demand, free of charge if we have it. Always shipped with original box.
Larfleeze (also known as Agent Orange to those who wield power from the emotional spectrum) is the first and for a long time the only individual to wield the power of the orange light. Little is known about his past except that he comes from an incredibly long-lived species, as Larfleeze is said to be over several billion years old. He was taken from his parents for reasons yet to be revealed and forced to work as a slave. His time as a slave was cruel and harsh: his cruel and sadistic masters starved Larfleeze and his fellow slaves in order to weed out those too weak to work in the hellish conditions they were forced to toil in. This cruelty and deprivation of even the most basic rights and privileges deeply affected Larfleeze, who at some point began to "hear" the material possessions in the society of the people whom he served begging him to own them. Some time much later, Larfleeze escaped and became a wanted criminal, along with several of his species.

Billions of years ago, Larfleeze belonged to a small guild of thieves which stole a number of artifacts from the planet Maltus, including a mysterious box supposedly worth an entire star system to the right buyer. In retaliation, the Guardians of the Universe sent their Manhunters to pursue them. Those that escaped discovered a map belonging to the Guardian Krona that told of treasure. The guild followed the map into the Vega System to the planet Okaara. There they discovered a temple, inside of which was a Power Battery containing the orange light of avarice. Feeling its power "speak" to them, the criminals fought amongst themselves for it. Eventually the Guardians and their Manhunters found them, however, because of its proximity to Larfleeze and the others, the Guardians could not get within reaching distance of the box.