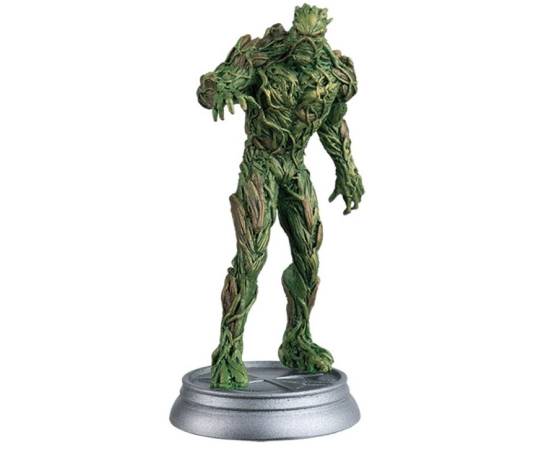 Magazine on demand, free of charge if we have it. Always shipped with original box.
The Swamp Thing is normally human sized or slightly larger than average, but he can grow bodies much larger. He once used Sequoioideae to grow a body the size of an office block.

The Swamp Thing possesses superhuman strength; however, the Swamp Thing's strength has never been portrayed as prominently as many of his other abilities. DC's New 52 continuity made several changes, though mostly highlighting previous abilities and a physical look not dissimilar from previous incarnations. The New 52 continuity did bring Swamp Thing further into the shared universe continuity by placing him permanently in the Justice League Dark team lineup, partnering with many familiar faces like John Constantine, Zatanna Zatara and Deadman. The Swamp Thing's powers and abilities make him the true powerhouse of the team. His power limits have yet to be established. He has demonstrated sufficient strength to rip large trees out of the ground with ease and trade blows with the likes of Etrigan the Demon.

The Swamp Thing can control any form of plant life, he can make it bend to his will or accelerate its growth. This control even extends to alien life, as he once cured Superman of an infection caused by exposure to a Kryptonian plant that was driving Superman mad and causing his body to burn out its own power.[14]

After the run of Mark Millar, the Swamp Thing had also mastered the elements of Fire, Earth, Water and Air; the Parliaments of each were later killed by the Word, implying that he has retained these abilities and has the power once held by the Parliaments; this has yet to be explained.

The new Swamp Thing (a resurrected Alec Holland) has no power over a White Lantern Power Ring, but he can control all forms of plant life and even grow every kind even if it is unknown to him; he can also grow from any plant life anywhere, dead or alive, this is seen when the Seeder creates a portal to the moon and banishes him there. However, Holland simply resurrects himself back on Earth from the plants growing on the Seeder's face.