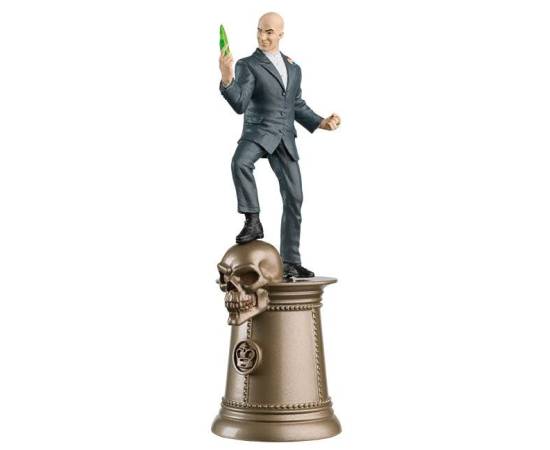 Magazine on demand, free of charge if we have it. Always shipped with original box.
Alexander Joseph "Lex" Luthor (/ˈluːθər/) is a fictional supervillain appearing in publications by the publisher DC Comics. The character was created by Jerry Siegel and Joe Shuster. Lex Luthor originally appeared in Action Comics No. 23 (cover dated: April 1940).1 He has since endured as the archenemy of Superman.[1]

Originally introduced as a mad scientist whose schemes Superman would routinely foil, Lex's portrayal has evolved over the years and his characterisation has deepened. In contemporary stories, Lex is portrayed as a wealthy, power-mad American business magnate, ingenious engineer, philanthropist to the city of Metropolis, and one of the most intelligent people in the world. A well-known public figure, he is the owner of a conglomerate called LexCorp. He is intent on ridding the world of the alien Superman, whom Lex Luthor views as an obstacle to his plans and as a threat to the very existence of humanity.[2] Given his high status as a supervillain, however, he has often come into conflict with Batman and other superheroes in the DC Universe.[3]

The character has traditionally lacked superpowers or a dual identity and typically appears with a bald head.[3] He periodically wears his Warsuit, a high-tech battle suit giving him enhanced strength, flight, advanced weaponry, and other capabilities.[4] The character was originally introduced as a diabolical recluse, but during the Modern Age, he was reimagined by writers as a devious, high-profile industrialist, who has crafted his public persona to avoid suspicion and arrest. He is well known for his philanthropy, donating vast sums of money to Metropolis over the years, funding parks, foundations, and charities.